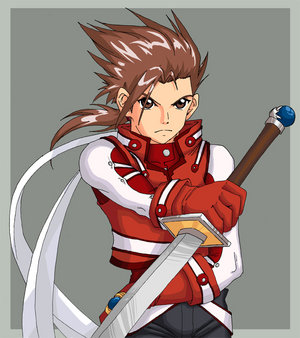 Eye color: Brown (hints of red are starting to appear)

Kratos had left with Derris-Kharlan. Lloyd knew that he'd never see him again as he fell to his knees, clutching the locket close to his chest.

And yet... Lloyd felt that this couldn't be the end for them. They'd come this far, only to part ways for eternity? No. This wasn't what Lloyd had hoped and envisioned. He wasn't done with his father yet, and he wanted him to know that too.

He wrote a note to his friends, telling them he was sorry that he couldn't travel with them any longer. He had faith that they'd be able to get along without him. The world was at peace now, and they would set out to make it an even better one. He had faith in each and every one of them. And he knew that his story in Aselia was done.

He made one last wish to the Eternal Sword, a reckless wish that he wouldn't be able to take back.

"Eternal Sword! Take me to Derris-Kharlan!"

To ensure that Kratos wouldn't send him back, Lloyd stuck the sword in the ground along with the ring. Underneath the ring, he placed the note to his friends. It was as he pulled his hands away and took one last look around the world that he disappeared, his last view of Aselia being the Eternal Sword and the scenery of the beautiful forest behind it.

It was only a few hours later that Kratos found Lloyd wandering the many twisted paths of Derris-Kharlan. He reprimanded the boy harshly, and it was then that Lloyd knew that he wouldn't be able to take back his choice, and Kratos wouldn't be able to fix it for him either. For several days, the two remained separated within the castle, each unwilling to speak to the other.

Lloyd then resolved himself. What was done was done, and he couldn't go on thinking of what would've happened if he didn't make his decision. This was his place now - standing next to his father and doing what he needed to do for Derris-Kharlan and all of its inhabitants.

When Lloyd showed that he no longer regretted his decision, Kratos was still reluctant to let him join him, yet he welcomed him with open arms.

Three years later, the duo still drift in space, searching for the perfect world for the angels and seeking out Exspheres on the comet, destroying them and freeing the souls within. Lloyd does his best to no longer think of and wish for the past, only hope for a brighter future.

Kratos Aurion - During the three years that Lloyd has stayed with Kratos, the two of them have grown close enough to be considered best friends. Lloyd knows Kratos well, and vice versa. Though his real father is missing right now thanks to being in Zelore, Lloyd hopes to return to him someday, or for Kratos to arrive in his new world with him.

Retrieved from "https://talesofdressing.fandom.com/wiki/Spacepiratelol?oldid=4454"
Community content is available under CC-BY-SA unless otherwise noted.